Getting to Conwy Marina

By sea or by land, come and visit

How to find us

Although the magic of Conwy will make you feel a million miles away from home it's easily accessed by sea, road and rail. 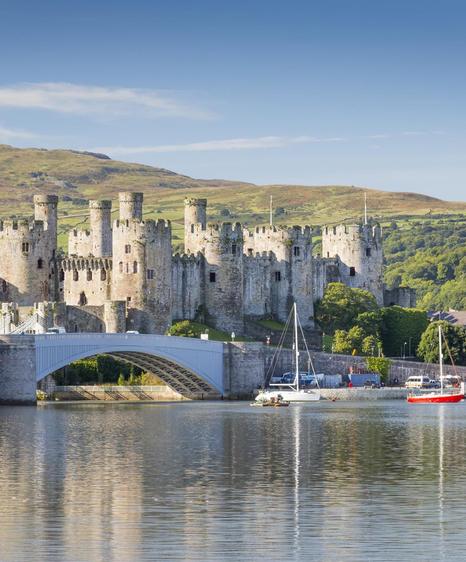 Conwy Bay lies between Puffin Island and Great Orme Head, both of which are easily recognisable. The first stage involves finding and identifying the red-and-white fairway buoy, (LFl.10s), the co-ordinates of which are given in the data. The bar is shown drying at CD, but even at MLWS it will have about half a metre, and more at MLWN. Another drying patch at CD is The Scabs, which is adjacent to the red can buoy C6. In practice this makes the channel usable for most boats about four hours either side of high water.

For entry purposes, bear in mind that at half ebb during springs the tidal outflows in the narrow parts of the channel can reach 7 kn. For a first-time visitor, the ideal time to enter would be a couple of hours before high water, and never to leave it later than high water. Bear in mind entry to the marina is only possible a maximum of three hours either side of high water. Pushing further into the Conwy estuary, Beacons Jetty will be seen and is left off on your starboard side. Conwy Marina entrance is to starboard.

Caution! Buoy positions should not be used as waypoints. Doing this puts you at risk of colliding with the buoy in poor visibility.

Travelling to Conwy Marina is easy. Road links to the town are excellent, with a road leading directly to the marina from the main A55 trunk road, which in turn, links directly into the national UK motorway network. Sea and air links too are good and ensure easy access from all parts of the globe. Junction 17, A55 Expressway.

There are Intercity services from London, Birmingham, and Manchester to the region’s main railway station at Llandudno Junction, with connecting services to Conwy.